These vegan latkes will blow your mind! Crispy on the outside, tender on the inside, they’re perfect with a side of applesauce or vegan sour cream and surprisingly easy to make.

Years ago I made several attempts at developing a recipe for vegan potato latkes before finally giving up and declaring failure. Eggless latkes can be tricky! I couldn’t quite get the mixture to bind, and many of my attempts came out soggy.

Well that was then and this is now, and nowadays I know a lot more about egg-free cooking. I’m happy to say that I think I’ve come up with a recipe for the BEST vegan latkes ever. And bonus: these crispy vegan potato pancakes are also super easy to whip up!

How to Make Vegan Latkes

Store any leftover latkes in a sealed container in the fridge for up to 3 days. To reheat, place your latkes under a broiler and broil them for a few minutes on each side, until they begin to get crispy again.

Can these latkes be made gluten-free?

Possibly! You could try making them with a vegan gluten-free matzo meal. You might also be able to substitute oat flour (make sure it’s certified gluten-free). I haven’t tested either approach though, so no guarantees!

Do I need to peel the potatoes?

Nope! But you’re welcome to if that’s your preference.

Can these latkes be baked or air-fried?

They can, but they won’t turn out as crispy. Preheat your oven or set your air-fryer to 425°F. I highly recommend lightly spraying or brushing the latkes with oil, though this isn’t required. Air-fry your latkes for about 10 minutes, until crispy, or bake them on a parchment paper-lined baking sheet for about 15 minutes, flipping halfway through.

Is there a substitute for potato starch? Can I use cornstarch or arrowroot instead?

Feel free to try, but I don’t recommend it. I went with potato starch for this recipe because I find it has the best binding effects. 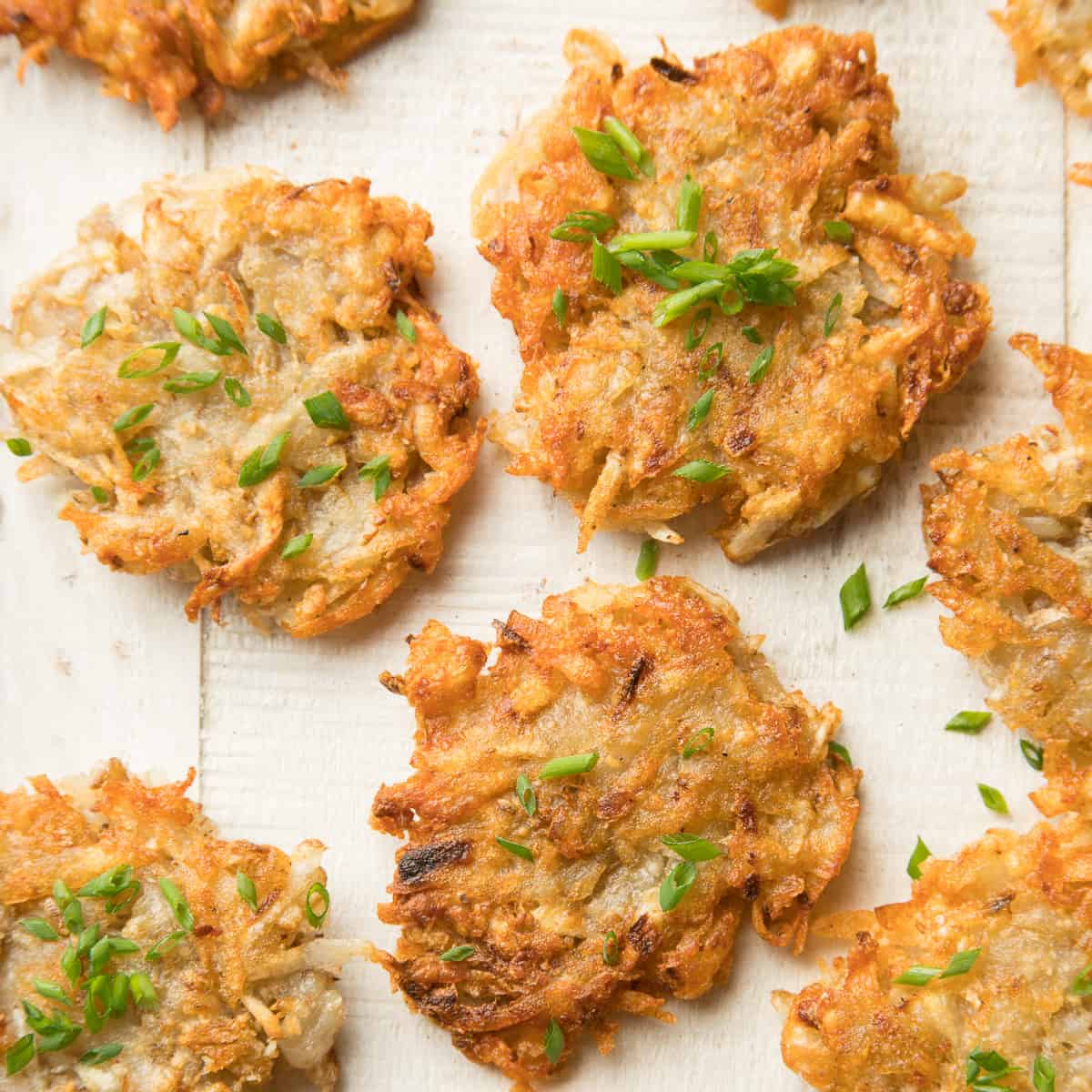 These vegan latkes will blow your mind! Crispy on the outside, tender on the inside, they’re perfect with a side of applesauce or vegan sour cream and surprisingly easy to make.

Nutrition information does not include applesauce or vegan sour cream.

Jennette McCurdy Opens up About Her Eating Disorders